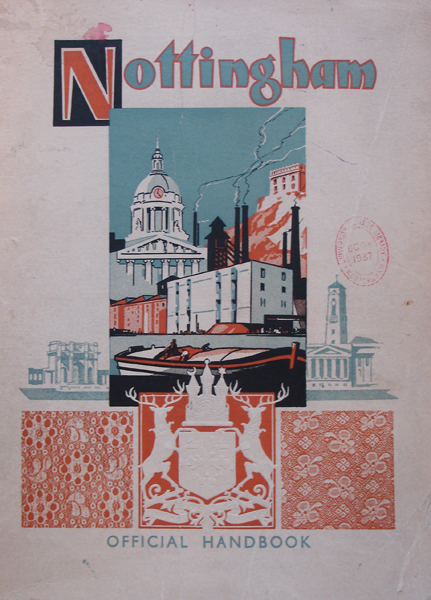 1937 Nottingham Corporation Handbook, with Trent Lane in the middle

Archival records inform us that it was planned by the engineer P. B. Woodger who would have been working under City Engineer T Wallis Gordon for the Trent Navigation Committee. Gordon worked in close association with civic architect TC Howitt and followed in the footsteps of Arthur Brown - Nottingham's second city engineer. The architecture of Trent Lane was a part of much wider scheme: From the 1920s to the 1950s huge new locks were constructed, such as Cromwell, Newark and Stoke Bardolph. Like Trent Lane, they were unique at the time because they were built of reinforced concrete and done in close association with the civic architect. Stoke Bardolph lock house was designed by TC Howitt no less. Trent Lane is a part of this major historic change in infrastructure of the Trent Valley before the age of combustion engine really took hold. The site is a key marker in the history of navigation improvements on the Trent which go all the way back to William Jessop. Its loss would be a blow to the a thorough understanding of the river's Twentieth Century development. 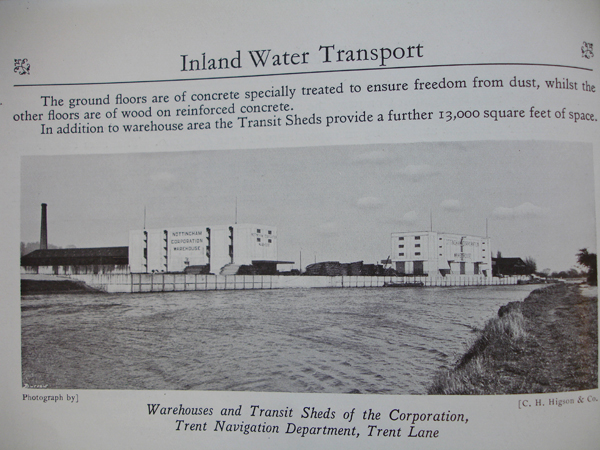 The brilliant white concrete during the early years

The Trent Lane depot consists of 2 warehouses, 1 basin and a workers' mess - all of which are of architectural interest. The two warehouses are both 170ft by 50ft, feature original internal spiral shoots, external sack shoots, hoists and spiral staircases. At warehouse #1 the original 'Nottingham Corporation 1930' typography can been seen moulded in the concrete. Warehouse number one (by the Trent) has 4 loading floors and loading dock, while warehouse number 2 (by the basin) has 5 floors and loading dock. There is also a rail line which lines up with these docks which formally connected to the LMS Railway. Both warehouses at Trent Lane Depot are of a inter-war neo-classical industrial style. It is basically taking the style of the 1919 brick Trent Navigation canal warehouse on Canal Street and improving upon it by using reinforced concrete. Warehouse #2 faces the inner basin, while warehouse #2 has a wonderful relationship with the river bank, which enhances the sense of place and history in this part of Nottingham. The best view of Trent Lane can be enjoyed opposite the river by the Hook; a floodplain and park in the suburb of Lady Bay. 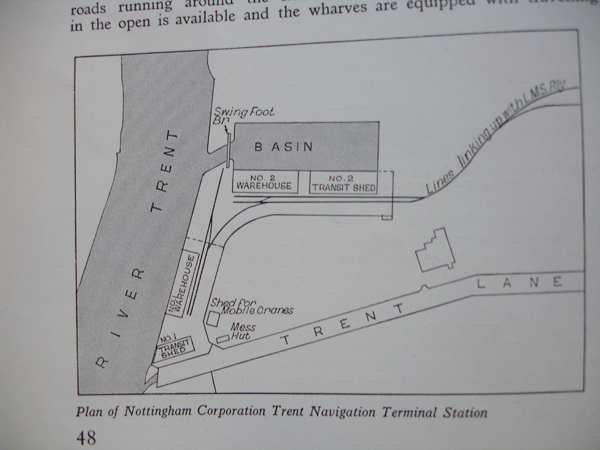 The original plan of the site

Completed between 1928 - 1931 and billed as "Nottingham's Highway to the Sea" Trent Lane Depot significantly increased tonnage carried on the Trent to Nottingham from 28,000 in the 1920s, to over 250,000 by 1936. The whole programme was ambitiously led by the Corporation of Nottingham after the Trent Navigation company came under financial strain. It was a part of much larger scheme to improve the whole navigation of the Trent from Nottingham to the Humber. The Trent and its locks desperately needed to be widened, in order to take the long chain of Trent Dumb Barges, which were carrying freight. In its day was a major fluvial freight initiative, making it like a Continental commercial waterway. 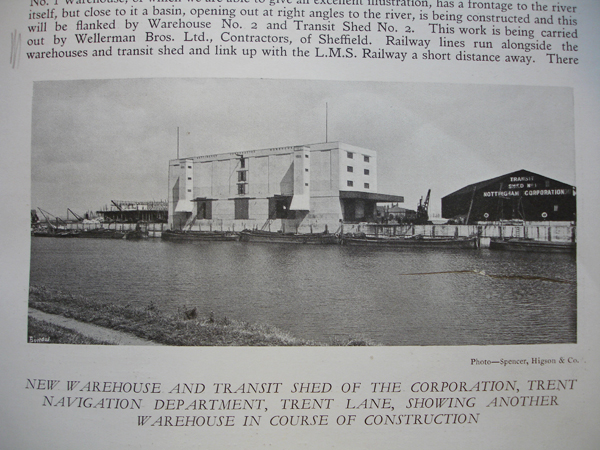 Another early image from the Corporation of Nottingham Handbook

For the city authority Trent Lane was an ambitious move to rival the likes of the Manchester Ship Canal - it had long been planned by Arthur Brown back in 1908. On the front of the Corporation of Nottingham handbook in the 1930s, a graphic illustration of Trent Lane depot featured proudly on the cover. Inside the document features two photographs and a significant write up about the site's importance. The cargo which was unloaded at Trent Lane depot in the 1930s included grain, Trent Valley gravel, tinned food, timber from the Baltic, metal, oil and cocoa. Companies which were using this facility include Shell Oil, Cadburys, local firm Bampton's packaging and number of builders' merchants. Generally most of the traffic was one way; from Hull to Nottingham.

Trent Lane continued to be a success in the postwar period but suffered in the 1970s during the rise of the car economy. By 1981 freight had significantly declined on the Trent and the site was closed and subsequently sold off. Numerous proposals have been put forward for converting the site into accommodation, mooring or leisure. British Waterways (or The Canal and River Trust) still has an active freight department on the Trent Navigation. As recently as 2006, EMDA published a report how improvements to the Trent can significantly reduce traffic and reduce CO2. However such a scheme, though profitable, required significant investment.

It is a nationally important site as it proves investment was still on-going during the inter-war period and that not all the inland waterways became quaint relics as soon as the railways started running which is generally how it's portrayed. This is clearly a major innovative design and possibly a unique survivor - it is highly likely that there is nothing else like it.