English Heritage have reviewed the application for listing and have decided to reject it. Though they recognised the importance of the building and it being locally unique it has been decided that it is not unusual or innovative in a national context. Please find their report attached.

It is disappointing that EH have decided that Trent Lane depot should not saved from the threat of demolition. However, the level of support received has highlighted the various organisations and individuals who are interested in intelligent development which is sensitive to the specific qualities of the inland waterways, the Trent Valley and Nottingham.

Though there is little else the campaign can do to prevent demolition, the petition to save the depot will remain open so that people can leave their opinions with the relevant authorities. The level of public interest has shown that Trent Lane depot deserves an innovative approach to its future. The very act of showing we care about what gets built, the more likely it is that development will not be so thoughtless.

While English Heritage review the application for listing, the Save Trent Lane Depot campaign has received letters of support from major local and national organisations:

National charity The Twentieth Century Society calls this "nationally significant, and possibly a unique monument to Britain's inter-war shipping industry" and "technically innovative when they were built, and represent major historic change in the infrastructure of the Trent Valley"

Nottingham historical society the Thoroton Society says this "must be regarded as a unique Nottingham landmark" and "deserves to be conserved and reused, along with its associated dock basin".

John Cooke at Shardlow Heritage Trust has said "Each year as I pass through Nottingham on the river I have wondered how such a magnificant facility can be allowed to stand unused, after all the effort that went into upgrading the Trent Navigation to provide an economic and environmentally friendly route between Nottingham and the Humber ports." 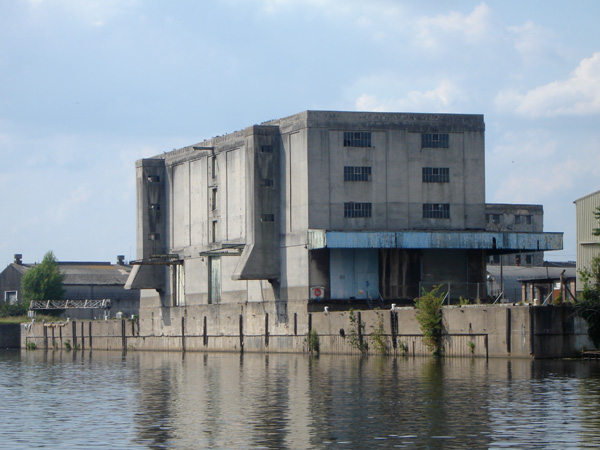 In light of the current demolition threat to Trent Lane Depot (REF 12/01616/PADA), I have put an application (#475207) in for listing with English Heritage. I hope you will agree that this site is of special historical interest. It would be a grave mistake for the city to bury one of its proudest achievements, which from 1928 to its decline in 1970s was known as "Nottingham's Highway to the Sea". There have been sound competition proposals (here, here and here) to save the buildings and develop the site but the owners The Homes and Communities Agency appear more interested in maximizing profit and speed, rather than heritage, place-making or design. A little gentle persuasion from the City Council or English Heritage is perhaps all that is needed. The situation is urgent as the demolition team are currently setting up their equipment. I am currently liaising with English Heritage, The Twentieth Century Society and Canal & River Trust (formally British Waterways). Bobby Drake from the Twentieth Century Society has already said "it appears to be a major innovative design and possibly a unique survivor".  English Heritage have informed me that they have put this in for emergency review early next week. Any delay to the demolition will be beneficial.

Please sign the petition - your voice will be gratefully appreciated.